ABOUT THE LYKE WAKE WALK

THE LYKE WAKE WALK is a complete crossing of the North Yorkshire Moors along their main east-west watershed between the Stone at grid reference 470994 and the Trig point at 971012, a distance of approximately 40 miles. The map below sketches out the line of the Walk:

The Walk may be done in either direction: this description is of a west to east crossing, starting just north of Osmotherley: 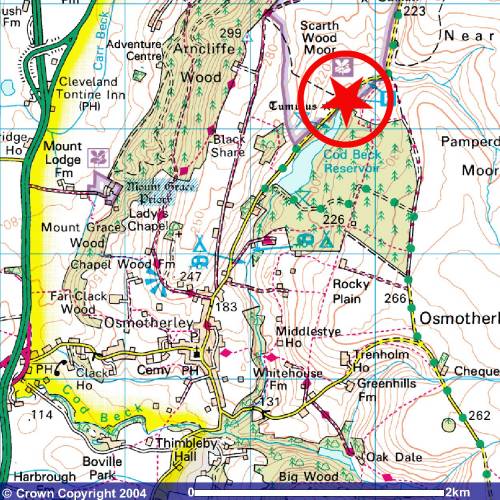 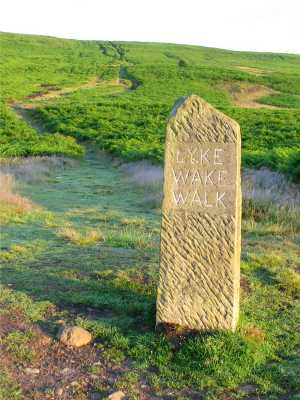 The essential point is that there is no official route. As long as you start at the start and end at the finish (or indeed start at the finish and end at the start, the walk can be done either way) and keep as far as possible to the high ground, you can follow any suitable route. So in one sense you cannot get lost, you just take an alternative route. That said, there is a recognised way to go and we sketch it here; it is described in much more detail in the Lyke Wake Walk Guide Book. And there should always be somebody who knows where you are and when you are expected.

From the start stone at the large car park follow the road north. After a kilometre, cross the cattle grid, and meet the Cleveland Way, whose well-signposted route you follow eastwards for about 18km/11 miles to Bloworth Crossing. Here the Cleveland Way strikes north, and the Lyke Wake Walk follows the dismantled railway line for about 7km/4½ miles until it reaches the Lion at Blakey. There are those who say the route passes a few hundred metres to the north of this isolated pub, which lies 400 metres/1,325 feet above sea level. They are in the minority. 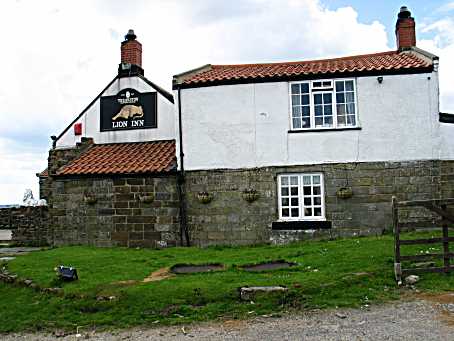 From Blakey follow the road round until just after the Fryup turning, from there to Wheeldale the route is undefined, and broadly follows the boundary stones (and the District council boundary) to the Blue Man-i-th'-Moss standing stone then along the watershed to the Wheeldale Road. Careful navigation is required, and the Lyke Wake Walk Guide Book (see our page with things to buy) will help you here. This stretch is about 17km/10½ miles long. 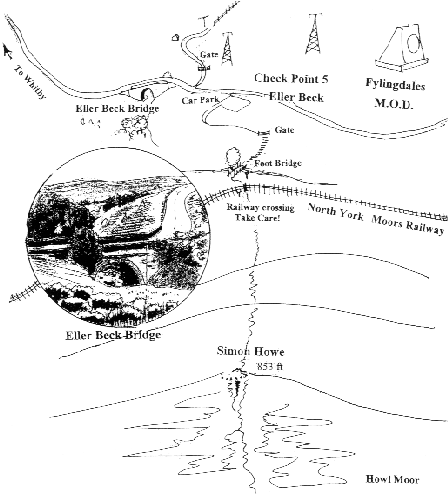 The 6km/3½ miles from the Wheeldale Road to the A169 road at Eller Beck is popular with weekend walkers and consequently is much better defined. In short order you cross the Roman Road, the stepping stones over Wheeldale Beck, and pass the former youth hostel at Wheeldale Lodge. As you approach the road the early warning station on Fylingdales Moor is a prominent landmark which strangely never seems to get any closer. (The famous "Golf Balls" are now a thing of the past.) As you approach the road, you cross the North York Moors Railway — keep a lookout here and if you are lucky you may see a train:

The route past the early warning station crosses MoD land. You can get through, but take care to follow the path along the bank of the stream. In more detail here is a suggested route:

Leave the car park and turn left along main road (It is possible to avoid the road by following the grass for 100 yards by turning left just before the road and descending parallel to the road to cross road opposite the army landrover track.) Cross road and turn right on army landrover track some 10 yards before bridge. Ascend gently on wide track for 5 yards to pass through wooden gate (SE 859 983) and continue on track with wire fence on your right. The track bears gently right to a point SE 862 985 where main track (grassed over) turns left and descends to stream. Continue ahead here on initially grassy path maintaining wire fence some 10 yards on your right. Approaching SE 864 984 pass small wooden hut 15 ft back on left.

At SE 866 934 the ground can become quite wet. In dry weather, continue ahead to cross stream by stream junction ( SE 866 984 ) [In wet weather, follow stream as far to the right as necessary in order to cross the stream ( SE 8669 9835 is good) then keep ahead aiming for the first white stake. At post, don't aim for second post but keep ahead to strike which was left to detour stream after 10 yards] and bearing right, proceed along path. Very shortly, the path becomes very narrow and is surrounded by heather. You will observe a line of white stakes parallel to the right – do be not be drawn to these but continue on path. It is best to keep to the leftmost path. Path is rising gently and becomes stony. At SE 88076 98616 observe grassy path and small stream ahead – cross this stream and observe the mound of Lilla Cross on the Horizon directly ahead.

If very observant, one will notice another army landrover track some 100 yards on the right with which you will eventually merge. At SE 882 986 merge with army track by small pile of stones and turn left, [There is the option of continuing parallel to army track on small path, however, this is very indistinct and hits the army track a few yards later by pile of stones and metal post at SE 884 986.] At SE 88625 98667 pass through wooden gate and after 10 yards ahead crossing cross landrover track on path gently climbing through wet ground passing 2 wooden posts. At 88881 98679 cross landrover track some 20 metres before Lilla Cross. Where path forks, take either path to choose on which side to pass Lilla Cross ( 889 987). The plaque is on the north side. Looking north-east, one can see the open sea and east the radio mast at Ravenscar can be seen. Avoid the temptation to drift off to the south after leaving Lilla Cross.

It is about 3½km/2 miles to Lilla Cross and 6km/4 miles to the A171 road near Jugger Howe. This stretch of moorland roughly from Lilla Cross to the end of the Walk is managed by the Hawk and Owl Trust and that website has a wealth of useful information. North York Moors National Park have now completed a major restoration project affecting the Lyke Wake Walk at Jugger Howe. Badly eroded sections immediately north of the A171 and down either side of the valley of Jugger Howe Beck have been provided with a pitched stone path and additional drainage works and vegetation management were also undertaken. >>More information and photographs.

To say that from the A171 road it is "only" 2½km/1½ miles to the end at the trig point by the radio mast underplays the reserves of energy that need to be drawn on to climb that last hill, but it can be done and thousands have done it.

The original tradition was to continue the extra mile to the bar of the Raven Hall Hotel which in practice brings the total distance up to approximately 40 miles. 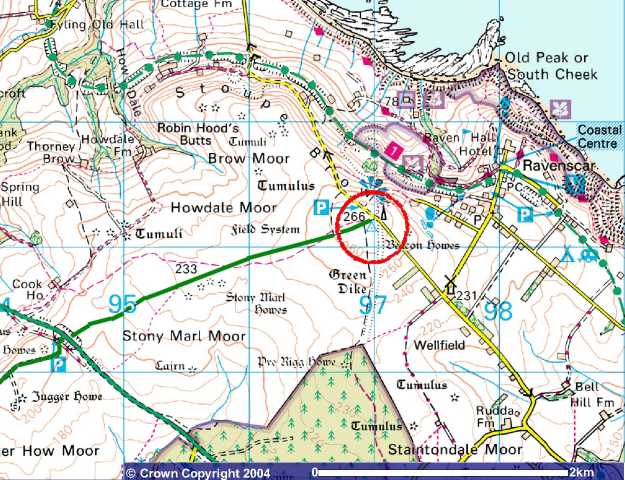