The New Lyke Wake Club was deeply shocked and saddened by the recent unexpected passing of its Club Chairman Brain Smailes. Brian was recovering in hospital from a serious stroke when he suffered a fatal heart attack. Our sympathies are extended to Michelle, Pam, Edwin and Jonathan at this difficult time. The New Lyke Wake Club will be forever in his debt. We have added this obituary to the website.

An engloomed gathering of the Lyke Wake multitudes took place at Ye Olde WoolePacke Inne, Wainfleet All Saints, Lincolnshire for a most horrendous Halloween Plus 9 Wake – ‘The Extraterrestrial’. In addition to the nutritional ordeal of the Funeral Repast, the congregation endured, nay suffered, various additional antics & contortions, described on the Lincolnshire Wake page. 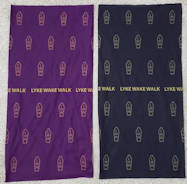 The latest addition to our range of merchandise is this stylish neck warmer, available in either black or purple. Head on over to the Things to buy page to make your purchase.

Dirger Ian Evans has done a whole lot of work contacting former Dirgers obtaining some wonderful archive material. In the past, the New Lyke Wake Club has been unable to assist with crossing enquiries pre-2004, however, we may well now be able to assist in some instances!

By popular request, it has been decided to bring back the signing in books (Book of Condolences) to both ends of the Lyke Wake walk.

This Book of Condolences has three purposes & allows you to:

The Club has made a grant to young Dirger Tom Evans to enable him to attend a three day course to improve his navigation skills in order to be able to better tackle the Lyke Wake Walk in the dark and in bad weather. He is now also equipped to lead group walks over challenging ground. This is one of a series of grants that the Club makes from time to time.

The North York Moors National Park has a highly popular programme that provides families and community groups with the opportunity to ‘adopt’ a section of the Cleveland Way. The New Lyke Wake Club has been lucky enough to have been allocated Section 7, which runs from BT Station, Arncliffe Woods (park at Sheepwash) to Huthwaite Green (Moorland and woodland), a total distance of 2.9 miles. This part of the Cleveland way covers the Western side of the route from the start / finish to Huthwaite Green. More information about the adoption scheme here.

DOUBLE PAGE SPREAD IN THE GUARDIAN

“Why would anyone want to hike 40 miles in less than a day? Because this ‘death march’ is the Yorkshire equivalent of climbing Everest…” or so says The Guardian in its Travel supplement on Saturday September 22nd.

Club secretary Gerry Orchard took Guardian reporter Peter Ross across in 15 hours, 36 minutes. And he seems to have enjoyed it. Gerry adds “It was a real pleasure to cross with Peter Ross. He had a genuine interest in the walk and the moors plus had many other interesting facets to his life………… we also shared a common interest in ‘matters Scotland’”.

Our regular walkers, Tom and Claire Chapman and David Allen have recorded a stunning version of the Cleveland Lyke Wake Dirge, which you can see here on YouTube.

You may think that building or adding to a cairn along the way is a harmless pursuit, helpful even, but you could be wrong. Those piles of loose stones might be the remains of something built in prehistory. Building cairns can damage the archaeological evidence. Linda Smith, an Archaeological Consultant working for the North York Moors National Park Authority, has written a special article for us about Walking, Cairn Building and Ancient Burials.

In June 2018 dry weather led to an increased risk of moorland and forest fires in the North York Moors National Park. Club Secretary Gerry Orchard helped the National Park Authority rangers to put fire risk warning signs up on key sites advising people what they can do to help to reduce the risk. The signs remained in place until the fire risk had passed. More information on the National Park website. 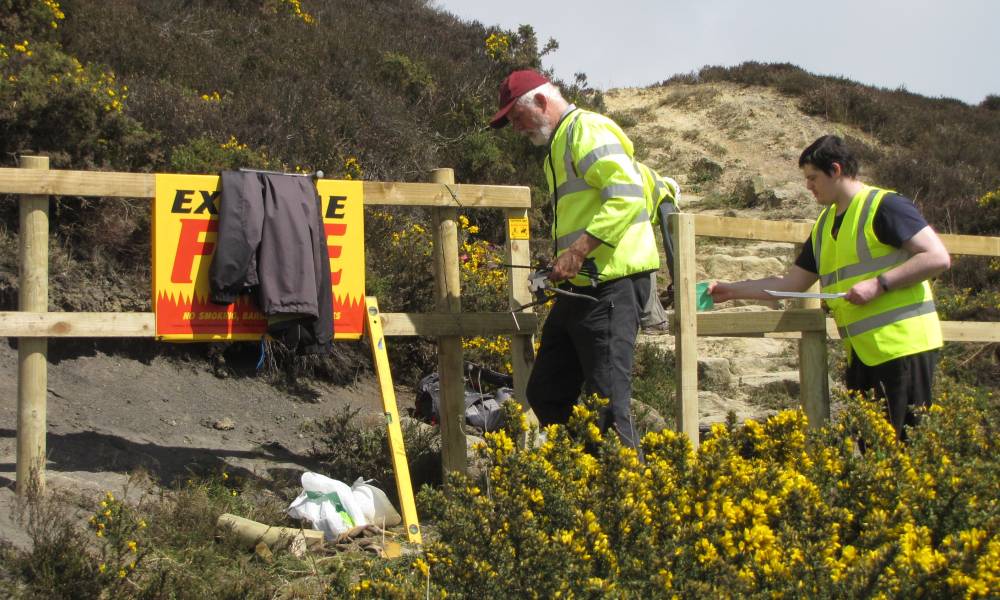 The 2019 Wake was held on Saturday 9th March. There’s a fine selection of photographs on the 2019 Wake page. It was followed on the Sunday by a rather less formal “Cake Wake” at the Lord Stones Café

The 2018 Wake was held on Saturday 10th March, postponed from 3rd March due to adverse weather (aka The Beast from the East). There’s a full report and a fine selection of photographs on the 2018 Wake page.

The 2017 Wake was held on Saturday 1st April (and despite the date there was an excellent turn out). There’s a full report and a fine selection of photographs on the 2017 Wake page.

The Club has managed to secure copies of this detailed map of the North York Moors on one sheet at 1:40,000 scale, with the Classic Lyke Wake Walk route illustrated. Tough, light and durable: £15.10, or a special price of £20.21 for the Lyke Wake Walk Guidebook and Harvey North York Moors Map . Head over to the Things to Buy page to do just that. 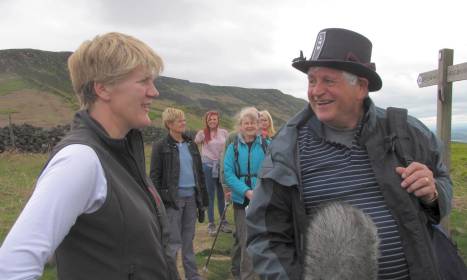 Friday 22nd May 2015 saw a recording on the Lyke Wake walk by Clare Balding for the Radio 4 Ramblings series. A number of Dirgers and Witches gathered for the event and we were even blessed by the presence of an Olympic torch! The programme was transmitted on Thursday June 4th. More details here on the BBC website, or download the podcast (12MB – right click & "save target as / link as").

Our picture shows Colin Walker being interviewed by Clare Balding. There’s a gallery of photos on the BBC website.

In 2015 we made a grant to young volunteers who carry out practical conservation tasks in the North York Moors National Park. They now have some new equipment thanks to our donation of £200. Tools such as spades, trowels and secateurs were purchased to help the National Park Authority’s Explorer Club volunteers carry out their work to look after the North York Moors. More details and pictures here.