THE NEW LYKE WAKE CLUB is dedicated to the memory of the late BILL COWLEY, who, with others, made the first crossing of the LYKE WAKE WALK on 1st October 1955.

Bill died on 14th August 1994. When it was announced that the 'old' Lyke Wake Club would close down in October 2005, the 'new' club was set up on 8th May 2004; to preserve the traditions enunciated by Bill and to take over the old club's functions of recording crossings, holding wakes and liaising with public authorities.

I heard about Bill Cowley long before I met him. He used to write articles in newspapers and magazines which circulated around the North York Moors and I used to read his words with delight because I was born and lived in those same moors. He wrote about things which interested me, such as the local dialect, tradition and folk lore. Then in 1955 he became linked with my home village of Glaisdale because he took what he described as an "interest" in Glaisdale Head Farm. I was never quite sure what that interest was, but the farm did feature as a possible place of rest and refreshment in the early history of the Lyke Wake Walk.

But even though Bill became closely associated with my local dale, albeit some four miles from my own home, I did not meet him until some time later. I can't recall the precise date of our first encounter but it was at a meeting of the Yorkshire Dialect Society. I had joined the Society in 1961 and went to most of its meetings but it was a while before I plucked up the courage to introduce myself to that famous man. When he discovered I was struggling to be a writer, that I enjoyed all things associated with the moors, that I could speak the North Riding dialect and that I came from Glaisdale "ower bi Hamer" as he put it, he would always make a point of having a chat about "summat on t'moors" or "thrang tahmes" whenever we met.

My recollections are of a tall and slender man with a firm jawline and heavily-rimmed spectacles upon a very character-filled face. His strong voice was rich with the dialect of the moors, and he had an encyclopaedic knowledge of everything associated with the North York Moors, particularly the area around the Cleveland Hills.

He became honorary treasurer of the Yorkshire Dialect Society and a member of its council where his ability to produce good ideas helped the Society to progress with its aim to keep all Yorkshire dialects alive and in constant use. One of his innovations was a long playing disc called Fost o' t'sooart, a compilation of recordings of dialect speakers including himself. He also edited A Cleveland Anthology and An East Yorkshire Anthology and was a regular broadcaster on BBC radio where he compèred the Northern Farmer programme.

It took me some time to realise that for eight years he had worked in India as a member of the Civil Service and a magistrate, that he had a Cambridge degree, that he founded the university's Yorkshire Society, that he led the Yorkshire Himalayan Expedition in 1957 and that he helped to create the search and rescue teams on the North York Moors. Definitely "a thrang sooart of a chap."

That he was a man of ideas is never in doubt. The fact he founded the Lyke Wake Walk is just one example from a very active and busy life but when I was later to become a member of the council of the Yorkshire Dialect Society, it was Bill who came forward with offers of help to me when organising events within the North Riding. Each year, the Society has four meetings - one in the North Riding, one in the East Riding and one in the West Riding, with the fourth in neutral York each Christmas and so it was that Bill and I found ourselves working together as we tried to entertain those who attended our North Riding events. And he would always ask me, "Ow's things ower bi Hamer?" And I would say, "Thrang, but in reet good fettle." (Thrang, by the way, is the North Riding dialect word for busy.)

And that was Bill - allus thrang.

Nicholas Rhea was born in 1936 in the North York Moors village of Glaisdale. In 1956, he joined the North Yorkshire force as a beat bobby in Whitby. He also began to write seriously after years of casual interest, and retired in 1982 after 30 years' service to concentrate on his writing. He is perhaps best known for his Constable books, which form the basis of the ever-popular Heartbeat series produced by Yorkshire Television. Now in his early 70s, Nicholas Rhea still writes full-time. 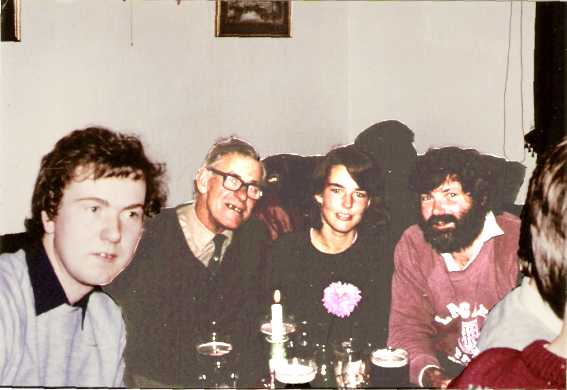