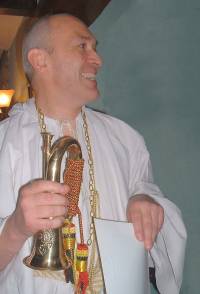 The 2006 Annual Wake was held on Saturday 13th May 2006 at the Queen Catherine, Osmotherley, preceeded by a VIGIL of the Council of Elders. Dirgers and witches were called to order by General Secretary Gerry Orchard (left) with a blast (or wheeze) on the trumpet. The Dirge was then sung, followed by The Loyal Toast to Edward II and the Lady of the Manor of Goathland and a Toast to the Memory of the Chief Dirger. Colin Walker read a poem by the Chief Dirger, Bill Cowley, from his copy of Tara Devi and other verses.

Treasurer David Gordon reported that finances were in a healthy state. This was due principally to the generosity of the Resurrectionists, and stocks of the car sticker were nearly exhausted. Sales in general had been encouraging and had made a useful contribution to club funds. 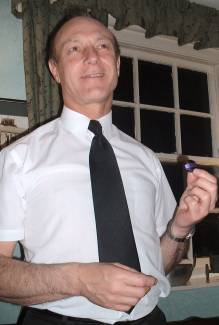 He thanked the quartermaster, Brian Smailes, for the efficient manner in which he shipped the purchases.

The existing chairman, Brian Piercy, had decided not to seek re-election and tribute was paid to the key rôle he had played in getting the new club off the ground, and to the time and resources he had put into this task.

A new chairman was therefore required, and Brian Smailes (right, with badge of office) was the popular nomination and was elected unanimously. Other officer posts were filled by the current incumbents. 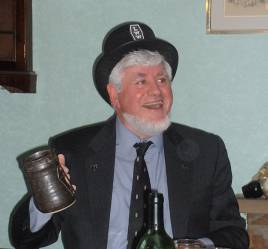 Colin Walker (left) was then inducted as a Past Master. Colin, known to legions of scouts as “Johnny” Walker, has led innumerable parties of venture scouts across the Lyke Wake Walk. He is also the author of “Johnny” Walker's Scouting Milestone pages, which includes this page on the Walk.

In thanking the assembled witches and dirgers for this honour, Colin proposed the creation of a new degree of Purveyor of Purgatory. This would be awarded to leaders who had successfully and without mishap conducted three parties across the Walk. This idea had previously been floated at the Council of Elders and had gained their approval. It was now agreed to by the Wake. Further details will be posted to this website when they have been finalised.

A slightly more slurred version of The Dirge rounded off proceedings.